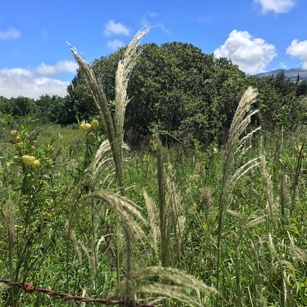 So I’m thinking the uh, the cane grass, wherever it came from- is prolific.

It can grow upwards of ten feet tall- when it wants to- reaching for that sunlight.

At first the roots are weak,
as it tries to get a little foot hold,
in the lava rock.

Twitching this way and that way,
moving one grain of dirt- at a time.

Until it finds a channel.

A channel, where it can send in the big guns,
the root of all roots, the mother load.

Once it finds it,
some sunny day just pumps the juice down into that root system,
and like talons- grips the earth like nothing around it.

My you, this is grass, not a tree.
Just a mere blade of grass blowing in the wind,
innocent, flamboyant … and its lazy leaves,
just bending and twisting flopping  over like a dog’s ear.

And then when that mother root gets going,
a few babies start-

Showing up on the on the surface … innocent enough …
child like leaves just growing, not even concerned about a root system yet,
tapping off the mother … and as the child gets bigger, their feet take hold.

And before you know it,
there is a family of ten.
The mother in the middle gettin’ stronger and taller,
thicker and grislier … one will not be able to pull it out- at all.

That would require an excavation … a big shovel,
and some burly guy jumping on that spade,
so that it can dig down deep where that root is …
to loosen it, pry it … pry it from the soil,
but that ain’t gonna happen. There’s just to many of em,
and they keeps goin, spreading like grass will do.

Cane grass grows in the woods,
it grows in the road , grows under trees, grows over trees,
and the stalk that comes out of the mother,
solid as a rock or a piece of oak.

Until one day, the stalk bears seeds.
Yes a packet of no less that a thousand seeds
pop out of the top of  that cane grass stalk …

And the wind flutters and the seeds loosen,
and fly this way and that way,
upstream and downstream,
in’da wind, chickens grab them,
birds grab them and they multiply.

That’s the island of Maui covered in Cane grass,
Palm trees, Cook pines, two Norfolk pines ,
thousands of Mangos, Avocados,
Eucalyptus , Christmas Berry, Wedelia,
and practically every weed known to man,
just hanging around poking its little head out in some crack or crevice,
some piece of gravel or a rock or a metal fence post,
or the top of telephone pole-

Maui … it’s like a botanist’s dream ….
or for someone in love with xeriscape,
their worst nightmare.

This is an audio version of the post as I experiment with the spoken word and play with a character (ja’jango) I created one day, while burning more than 8000 calories, drinking nearly two gallons of water, all while working a tree job in the arborist industry.