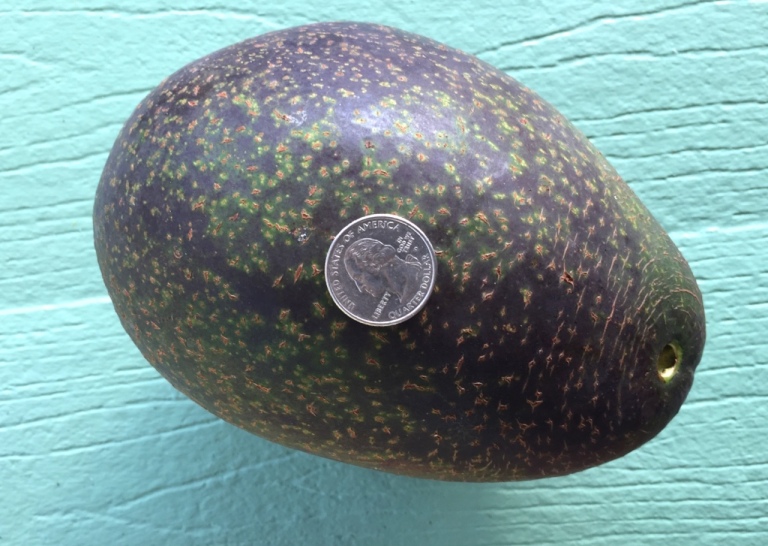 Of course, there is a little story behind this big avocado.

Prior to arriving on the Islands, I found avocados only in the stores. They were from Mexico mostly and were shipped thousands of miles in little mesh bags to my northeast United States home. They were small little Hass avocados about the size of a baseball if you were lucky. They were good.

One of my first ventures in Maui was to visit a Lilly farm where they maintained ponds for the Lillys and also had fish to stock the ponds. My friend Stephanie had made a water garden and needed fish for it to keep the mosquitos from hatching in the open water. The fish would eat the mosquitos before they could fly out and come find one of us to nibble on, so fish were key to having a water garden. We were given the fish and then invited to look around the farm.

While at the farm, we saw an avocado tree in the back of one of the large Lilly ponds. We walked toward it and to our amazement, saw avocados the size of softballs, maybe larger. They were out of reach and there was no ladder in sight so I bent down and allowed Stephanie to get on my shoulders. This provided us with enough height for her to reach one, which she picked. The owners of the Lilly farm were happy to share and we took it home. It was delicious.

And of course, I had to sprout the seed using toothpicks. You may know about this method. After a few weeks, it started to sprout and grow. After about six weeks, it was ready for a pot. It enjoyed the pot and once and a while I would walk it around the yard looking for a place for it. It would be a big tree one day, so it needed some space.

Stephanie had suggested a place and we would come to call this, the avocado garden. When it came time to plant it, I placed it on the ground and let it acclimate to the light. It grew more and eventually decided that it wanted to stay there. One sunny Saturday morning, I went to see it and I discussed the process with the small plant. It would come out of the pot and be planted into the soil where it would stay for the rest of its life. No more trips around the yard just the rise and fall of the sun during many days to come.

I transplanted it and made sure it retained all of its little roots. It settled in and life moved forward. Weeks, months and then a year would pass and it would grow a little more. Two years, then three years more. I did not trim it, but let it find its length and way in the sunlight it would have. A Bamboo growth blocked the morning sun, so much of its growth appeared on one side, but it was doing well. It was taller than me by the third year, maybe seven feet. Still well below what it could achieve, but it was happy and thriving.

In the spring of the fourth year, it flowered for the first time. It was exciting to see. There were only a few, maybe a dozen or so flowers but after a week or so, small little fruits appeared. The little avocados, only the size of peas started to grow.

Time went on, the summer days and heat arrived. The winds and rain nourished the little tree. And then one day while weeding around the gardens, I saw one, then two then three. They were large, very large and I thought the branches would break from them, but they didn’t. It would take a few months into the fall before they would be ready to pick, but one by one, we harvested them. Watching them closely in case they would fall off. I mistakingly picked one or two, too early, but they ripen eventually after placing them in a paper bag. If you pick them too early, they don’t taste as good as they could. Sort of like those little Hass avocados from Mexico I spoke of. Still good though; It’s an avocado after all.

It’s always a guessing game when they should be picked, but there are some signs that help. The glossy green shell turns dark and loses its luster are a couple indicators. Of course, if it falls off, it’s certain it will be ripe or be ripe soon, but you need to head off the rats which would certainly nibble a little hole in them. I am not a stranger to avocados with holes in them. When you find one with such a hole, if it is a shallow nibble, you can just cut the hole away and still have a lot of the avocado left. Surprisingly, I’ve seen rats that tend to eat just a little and move on. Silly rats.

So this would be the end of 2017 when the harvest was finished. It would have been about 4 and half years for the little tree, sprouted in the late summer of 2013, planted in September 2013 and then to have the first harvest in 2017. They were delicious. We had one left around December and wanted to share it with Stephanie’s daughter who decided to surprise her mom for a Christmas visit. We managed to time the picking and it was ripe for when she arrived, but this is another really fun story for another time.