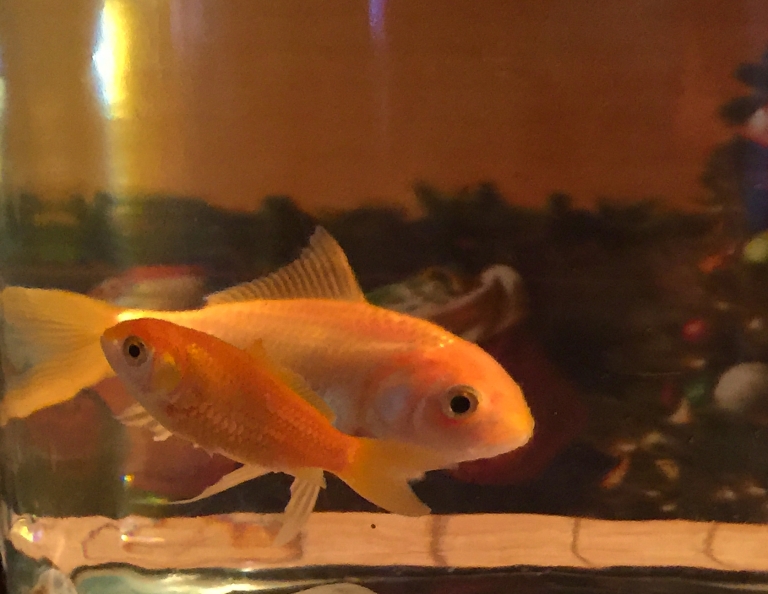 I lost my fish.

It does not seem so harsh, to one’s heart, to lose fish that you keep in a tank or a pond. They don’t love you- or at least we don’t know if they do.  We care for them, we feed them, give them an environment to live in- that is kind and caring and hopefully fun too.

They bring us joy as we personify them with feelings and attitudes toward us. Perhaps they do have feelings as they look at us intently, when we are near them. They shake their little heads in an effort to communicate when hungry, but then perhaps it is just their evolutionary ways to survive. They adapt to the situation with their life force and figure out a way to get their needs met, basic stuff … food and clean water with plenty of air … and perhaps some cerebral fish thoughts at the same time. 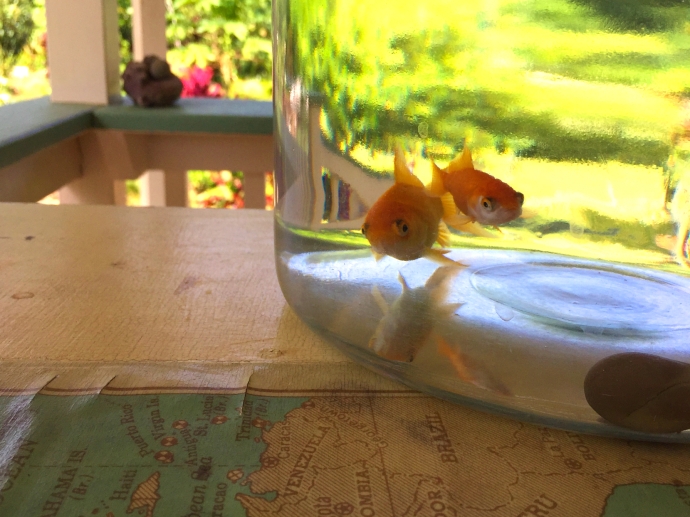 I had these fish for about three years, first starting inside in a small one gallon vase. They were cute and content in their small place. It was a chore changing water, but it became a welcome chore, knowing they were getting fresh water and attention. Perhaps they liked the excitement of the water change. I would have to catch them with a net and then place them in a holding bowl. I would prepare the fresh water and then pour them into their home when ready. It was a wild ride and an adventure for sure.

They were getting too big for their inside digs, so I decided to put them outside and tended to them in the same way.  Caring for their environment, feeding them and fending off toads from going into their pond. They seemed happy and grew much larger, quadrupling in size within six months. Big became bigger.  Little did too. 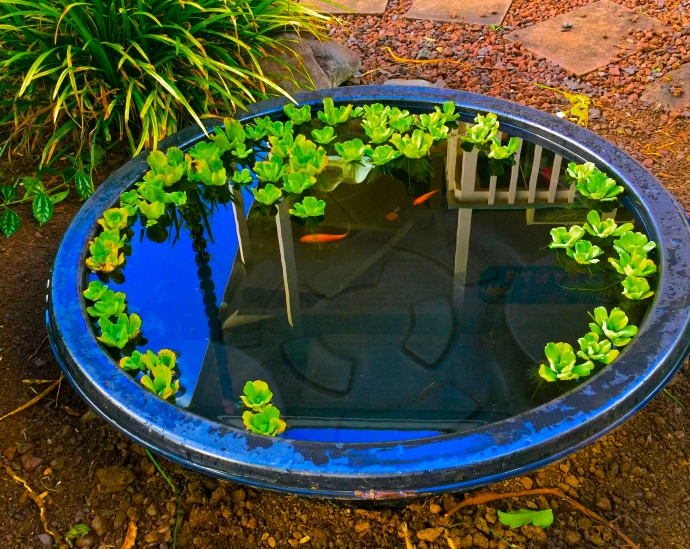 Big was the one in charge, knew the tank and the situation, or so it seemed. Little had lost his dorsal fin during some event in the water.  He still managed to wriggle and move, doing what looked like a Salsa move, around a dance partner that was not there.

They were pals. Best buds, hanging with each other to sleep and finding comfort when the day was too much to handle alone. It is rare to find a friend like that. They are there for you no matter what and in what ever capacity is required. 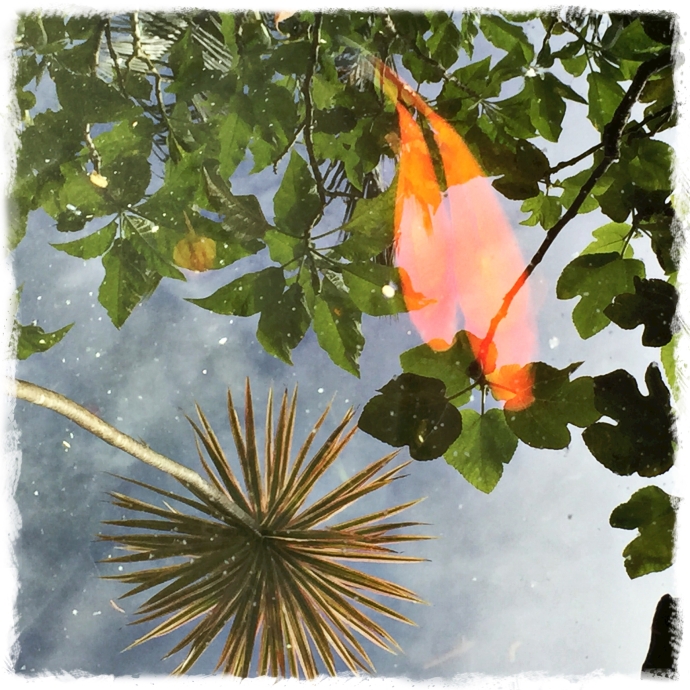 They seemed to enjoy their new digs, the pond outside. Even still I thought that they were still in a small pond. Such a confined life for fish who could have the entire sea to themselves. I continued caring for them, day after day. Feeding them in the morning as the sun rose and in the evening when the sun would set. I was late a few times and they let me know, but all was good and they chowed down on the food they were given.

And then yesterday, Big was no more. I started to look for the two of them, but only saw one. Big must have jumped out and was eaten after he died from lack of oxygen. I do not know for sure. I could not find a trace of him. Once I realized it was Little who was left behind, I saw him huddled tight and close to the filter, alone. I took him out and put him in the old jar he grew up in, clearly too small now.

I cleaned the pond and then put it back together. I should have just left it in place and done a partial water change, but I wanted to flush it completely to remove the energy of loss for Little, allowing him to start fresh. I put him back in and went back to gardening. I noticed afterward that it was now leaking.

I thought of what to do. Put him back in the jar, but it was too small, although he may have been okay for a while. I decided to get a new plastic tub for him and traveled to the hardware store to pick one out. I put him in it.  It was blue and nice and new.  He seemed okay … the new surroundings providing some cerebral enlightenment or so I imagined.

At the end of the day, I went to feed him in the new tub, he was not eating. I had noticed that he had not eaten the night before either. There had been lots of food in the original pond. His hunger languishing, perhaps sad, missing Big. I do not know.

The next morning I went to feed him and he was lying on the bottom, on his side, resting peacefully.  I was very sad to see this, but now I know he is with Big now … and perhaps they will enjoy the other world for a time … and come back again someday.

I suspect he may have been shocked by the water change. It seemed okay, clean and no different than before except it was completely fresh water. I considered the plastic tub as a source for a toxin too. I do not know, but I suspect it was something I did to his environment.

I must not blame myself, although, I had taken actions in effort to change his situation, his life. My care falling short of what was expected of me. These are the risks of making changes. We are not privy to the outcome, just the hope that what we do is right and good and loving. Ultimately I am responsible in some way for the life around mine.

I can’t help to think of the parallels with my two sons, who I cared for.  They are both grown now, but I am estranged from one completely because of a divorce and the other one is distant, but still communicates when I message him. I am shut down because of this loss. I love them both dearly. 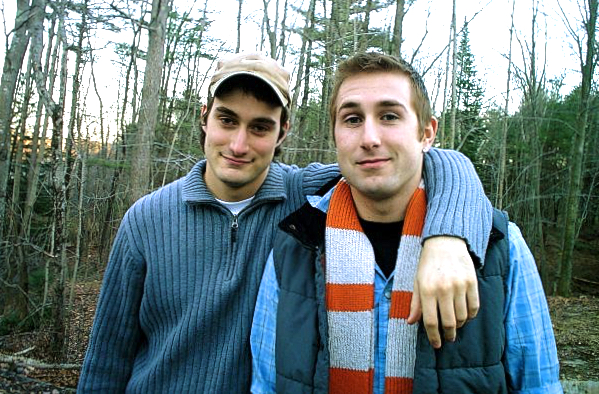 I had tested emotional waters for myself by caring for the fish … with love and caring as I cared for my children, doing everything I could to nurture their life and give them opportunity and hope, love and affection as they grew.

Yesterday as Little was in the glass bowl, he let me pet him, staying close to my touch for a time as we thought together of what had transpired, losing Big. I did not cry, but my feelings edged to the surface.

My eyes eventually flowed; however, and I wrote as I always do to cope. Time well tell what lies ahead in the all of it. I will find a place for Little in the gardens in memory of him and the joy he brought me the past several years. 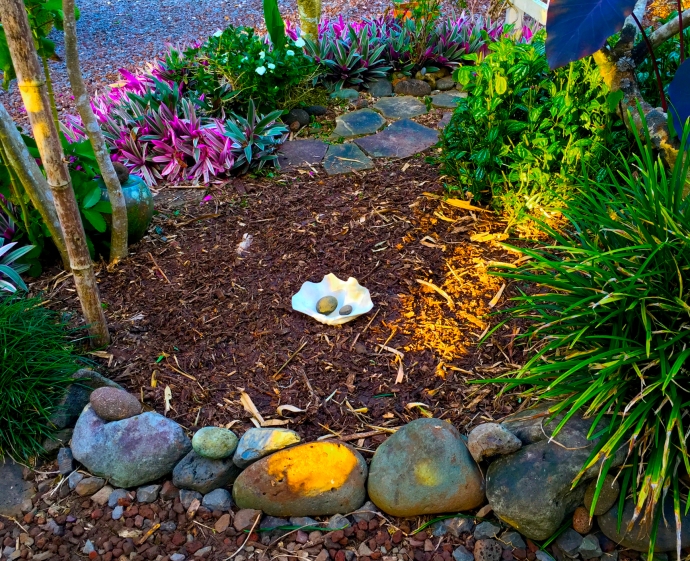 Life is short. I have seen this all to often with friends and love ones moving on.  Myself still here, doing, living and trying to enjoy each and every day. Life is a gift. We live and contribute in some way, small or large into the fold, and when fortunate, find something to love and care for.

I am grateful for my life and the lives I have met, those who have helped in some way and with their gifts and for their life that they have shared with me. After all, it is the collaboration of all our lives that matters the most.

My hope now is that Big & Little find new way in an adventure that awaits them. 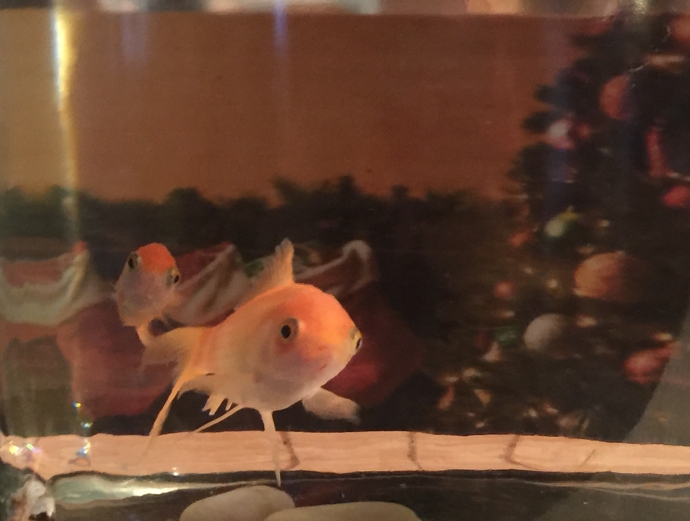